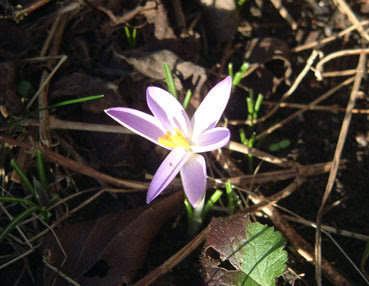 The previous owner of our house left us with a plentiful supply of purple crocuses naturalised in the lawns. There are some in the front garden - or there were until the Tesco's delivery man wheeled his trolley over them - and there are some in the back lawn where they flower defiantly despite being sat on by clodhopping ginger cats.

And I've also got a rather nice bloom inside the house today. I don't have that many houseplants, but this Chinese hibiscus which my mum bought me at Tewkesbury Garden Centre a great many years ago has survived neglect and house moves and still produces these spectacular flowers with a shamelessly ostentatious set of reproductive parts. The green and pink foliage in the background doesn't belong to it, that's a small dragon tree which I've also had for the best part of a decade. 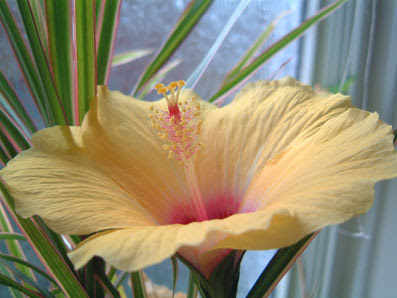 My most antique of houseplants is a spider plant which came with my first flat which I bought in 1993. The girl who lived there before said she'd had the plant for as long as she could remember. It's still going strong and has come with me on two subsequent house moves. It's also putting out a new flower stalk at the moment.

Seed sowing has begun, with onions and peppers on the go. Peppers take a while to germinate and need warmth so I've got mine precariously balanced on a tray above the radiator.

If you save your own bean seed it's worth keeping a check on your stored seeds periodically through the winter in case you get a problem like this: 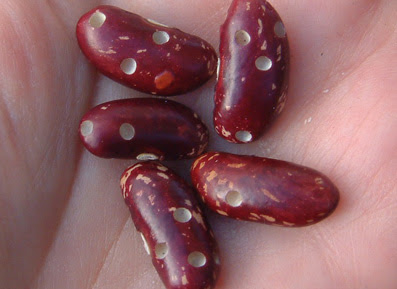 Round white bulletholes in seeds of Vermont Cranberry, the work of the bean seed beetle.

These showed up in the space of a couple of days after I bagged up some Vermont Cranberry and put them away in a box, and it was lucky I happened to spot them because more than 20 of them had hatched out inside the seed envelope. I don't normally find bean seed beetles in French beans, they're more commonly a problem with broad beans. I've also tended to find only one beetle hole per bean but these were riddled, with as many as seven holes in each. I don't know whether Vermont Cranberry is particularly attractive to them or whether these just got unlucky.

The Cottage Gardener magazine of the 1840s describes these pests better than I ever could. The beetle "... is produced from a grub or caterpillar, which has eaten away all the vital parts of the seed; and when it has passed through the chrysalis state, and given birth to this beetle, the latter makes the hole in order to escape into the open air, there to perpetrate more mischief upon the growing crops."

Whether the beans are still useable after having holes gnawed out of them depends on where the holes are. Much of the content of the bean is stored energy for the seed and it can afford to lose a bit of that. As long as the embryo of the seed is not damaged the bean will still germinate. I don't hold out much hope for mine though with so many holes ... luckily I've got plenty spare.

The easiest way to prevent this problem is to freeze the beans after harvest, which kills off any insects and their eggs which may be lurking within the seed. Seal the seeds inside an airtight and freezerproof container, and freeze them for at least three days. Then place the container somewhere at room temperature for at least another day before opening it, otherwise you'll get condensation on the seeds which may ruin them. It's also very important to make sure the beans are thoroughly dry before freezing them, as the low temperature can damage the plant tissues within them if there's still moisture in them. This treatment can also be used with peas to get rid of pea moths.

Pity the Victorian gardener before the invention of freezers. Bean seed beetles were a major problem for them, and they had to boil the beans to kill off the pests, which risked ruining the seed anyway.
Posted by Rebsie Fairholm at 7:19 pm