Moan of the day

'Scuse me, but there are times when a girl's gotta have a good rant.

IS IT REALLY NECESSARY TO USE PETROL-DRIVEN POWERTOOLS IN A DOMESTIC GARDEN?

Now, fair enough if you have a huge garden, or the occasional heavy-duty job which can't easily be done by hand. But my next door neighbour, still blissfully unaware of the song I wrote about his leafblower, really has a thing about powertools. Talk about using a petrol-driven sledgehammer to crack a nut. Got a dandelion coming up? Vroooom, whip its head off with a motorised trimmer. Is that a twig sticking out of the hedge there? Eeeeeeeooooooww, shred the living daylights out of it with a power-saw. Couple of leaves just fell on the patio? Brrrrrrrrrrr, chase them off with a turbo-charged blower. I guess these gadgets make him feel masculine and empowered. But they also stink and make a horrible racket.

Maybe I'm just grumpy today because I didn't get enough sleep. Last night while I was getting ready for bed I dropped a pair of underpants on the cat, and she just sat there like nothing had happened. And I laughed so much I set my asthma off.

Meanwhile, t'other cat (the ginger peril) has taken to harvesting his own beetroot and chasing them along the garden path. 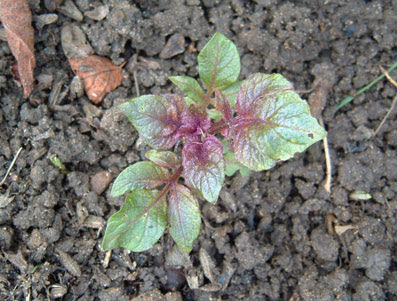 Hope springs eternal. When you're a potato.

Rather unexpectedly for this time of year, I found a baby potato haulm showing its face above ground. It probably wasn't expecting to find itself in England in January, but there it is. It must be from a previous crop, although with its rosy foliage it looks like Red Duke of York which I planted in this spot last year, way too early, and which never showed itself above ground. If so, it must have sat dormant for the whole of last season and now suddenly decided to go for it.
Posted by Rebsie Fairholm at 5:50 pm

Oh! Am I with you on noise pollution!!
Where I live in Bulgaria we seemed to be surrounded by yobbos with off-road motor bikes until I realised that no-body had one of those, it was chain saws when people were cutting up their winter wood.
The other noise is dogs. Not like UK, in BG every house has one chained up out-side: one barks and sets off the neighbour. This is passed on until it spreads all arround the village. I have to wear ear plugs to get a good night's sleep.