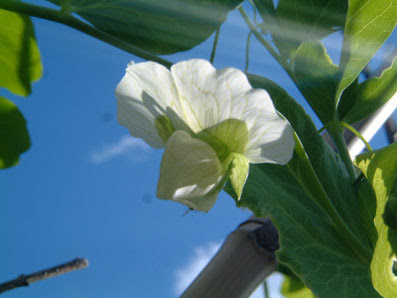 Age: introduced before 1847
My supplier: W Robinson & Son
Pros: beautiful, bounteous
Cons: needs to be harvested before the flavour turns

Ne Plus Ultra is an old-fashioned tall pea which needs to be grown on adequate supports. In fact it's one of the tallest, so you should allow for up to 7ft of luxurious top-heavy growth. The name means "nothing better", which might be pushing the bounds of credibility somewhat, although it does date back at least to the 1840s so it may have been the best thing available at the time. (See, even the Victorians went in for marketing bullshit, they just did it in Latin.)

Interestingly, I recently found the variety listed in the 1855 edition of The Book of the Garden by Charles McIntosh, but as an 'also-ran' rather than one of the varieties recommended by the author. However, of the several dozen varieties listed in the book, Ne Plus Ultra is one of only a tiny handful which are still available today (most of the others being extinct) so it must have something going for it.

It's a vigorous plant with large leaves. Flowers are a bright pure white. It's not intended as a mangetout type, and eaten raw the young pods taste quite bitter, although they're pleasantly crunchy. It's much better to let them develop into full size peas and shell them out.

Pods are long, large, elegant and smooth and would probably make a nice exhibition pea for those who are so inclined. They only turn leathery at full maturity.

The peas themselves are well packed into the pod, averaging eight to ten peas each. And the flavour is pretty damn fantastic when the peas are young. It doesn't quite reach the same pinnacle as Alderman but it's pretty close, and it's actually probably even sweeter than Alderman, although the flavour is less rich and complex overall. If you like your peas as sweet as sweet can be, this is a good choice. However, you do have to grab them while they're young if you want the flavour at its best. Mature peas go starchy and develop a certain firmness of texture. Not that there's necessarily anything wrong with that if you like peas with a bit of substance to them. But I found there was something of a trade off between yield and flavour. To enjoy them at their yummiest they had to be eaten before they reached full size, which felt slightly wasteful. 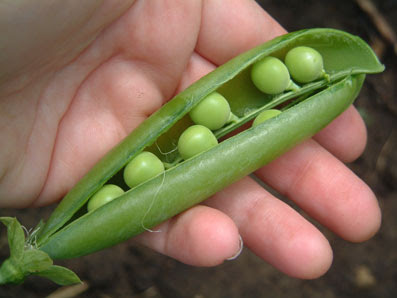 Not quite mature, but this is the optimum size to harvest Ne Plus Ultra if you want to enjoy the flavour at its sweetest

This is probably of no interest to anyone but me, but I found Ne Plus Ultra a good variety for hand pollinating. It doesn't shed its pollen until the bud is quite mature, so you can allow yourself the luxury of using larger buds which are much easier to work with than tiny ones. The anthers are very easy to pop off, and the stigma stays receptive for quite a few days, so it's possible to pollinate it some while after removing the anthers, or to re-pollinate on subsequent days to increase the chances of success. It takes well to hand-pollination and often produces a whole pod full of peas from a single pollination.

Now, one of the things that is supposed to be special about this variety is that it has powdery mildew resistance. In a British garden, powdery mildew is the biggest menace and will ruin a late-season crop long before the frosts do. Some modern varieties have been bred for mildew resistance but heritage varieties are almost invariably susceptible to it. So I was quite excited to put Ne Plus Ultra to the test, having the notion that I could cross-breed it with other things and possibly make new mildew resistant varieties.

Ha. Although the main summer crop was absolutely fine, once the damper weather set in Ne Plus Ultra certainly didn't show any sign of mildew resistance in my garden. On the contrary, when I tried growing a secondary late-season crop (see below) it was choked to death by the horrible smelly fungus before it produced a single pea. Don't let that put you off trying it, because the 2007 season was exceptionally damp and the summer conditions were ideal for mildew. I will try it another season before making any firm judgements. 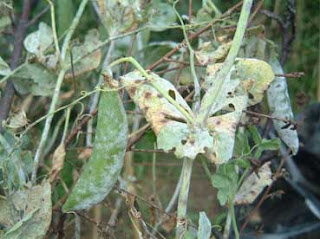 Aside from seasonal mildew, the variety seems healthy, robust and trouble-free, and the yields were good.

Ne Plus Ultra is one of the few Victorian peas which is still commercially available (and one of the oldest), and its availability is increasing. I got mine from W Robinson & Son but I've seen it in one or two other catalogues too.
Posted by Rebsie Fairholm at 5:36 pm

I'm assembling my growing list for the year and find these heritage veggie reviews very helpful. Thanks!

Thanks Robin, that's just the kind of feedback I need to galvanise me to get the reviews written up from my messy collection of notes!

Hi Rebsie,
I had a great time growing the seed you gave me - reached at least 7 foot, cropped well , tasted good. You are right they need really strong support - by mid June they had toppled over (I thought I'd braced them well but obviously not well enough). I've let them grow on and now they are browing off so I'll save seed for next year.

Hi Rebsie, I have obtained some seeds of a pea called "Radio". Would you know anything about this variety please? It's a tall grower 6/7 ft. Would you also like any seeds to try for next year? Contact me at :- Barkelberrybear@aol.com

Do you know when I should plant Ne Plus Ultra peas out (in the UK)? The packet says "Sow Mar/April and again in early summer. Germination is poor on cold soils, start indoors until soil temps reach 10C". I have no idea when the soil temperature reaches 10C and I also have no idea if that means 10C during the day or at night or if there's no difference anyhow.

I take it that nobody is interested then? It has been over four years since I asked. lol.

HELP!! I am looking for the Ne Pluse Ultra seed. I live in the USA and have not found it anywhere in the states. Would anyone know where I could find them? Would love to grow them in my garden.
Thank you.

Ms Peggy Olsen
Re Pea Me plus Ultra. I have just today purchased
This variety of pea,it totally new to me but I would be quite happy to split the packet and send you half.Although of isn't a large
Pack. (I have not opened it yet) you are welcome to them.
I believe you can contact me via email through
This blog .I'm not sure ,this is a first for me
Or if you can leave a message maybe I can send them to you

I believe that you can purchase this pea from the following company in Canada. I don't know what the laws are for postage into the US from Canada, but here's the address.Jim Ternier and Rachelle Ternier
Box 2758
Humboldt, Saskatchewan
S0K 2A0
Canada
Phone: 306 682 1475
Email: prairie.seeds(at)sasktel.net