Charles McIntosh (1794-1864) was the author of a wonderful book published in two volumes in 1853 and 1855, The Book of the Garden. It's recently become available online from Googlebooks, and is well worth a browse. The following is an edited extract showing the results of his experiments with peas at Dalkeith House. 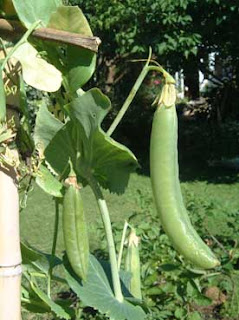 "During the years 1850-51, we sowed upwards of one hundred reputed sorts in the gardens at Dalkeith — fifty sorts in each of these years. They were in each case sown on the same day (25th March), in the same soil, and under the same circumstances. Out of that number we selected twelve as being truly distinct and useful; yet one half of these would be quite sufficient for even our use, who require them during the longest possible period.

1. Hair's dwarf mammoth.—2 feet; seed large; wrinkly; bluish green when ripe. Equal in flavour to any of Knight's marrows, hitherto considered the best in this respect. A most productive pea, continuing, like Bishop's new long pod, in bearing for a long time, but somewhat later. Indeed, it is a truly second or general crop variety. It is larger in pod than Knight's dwarf marrow, and about seven days earlier. It requires highly enriched soil, and the peas to be planted from 4 to 6 inches apart in the line, as they branch out in the manner of Bishop's. One of the most valuable for small gardens and private families, and, like the latter, although large when sent to the table, if not too old, eats deliciously, having a great deal of the marrow property about it.

2. Lynn's prolific.—4 feet; seeds under medium size; wrinkled, and having a dark eye when ripe; seemingly a distinct variety of marrow; very productive, and stands drought well. Suited for a general crop.

3. Sutton's early Goliath.—4 feet; seed and pod large; in flavour resembling Knight's marrow-fats. Suited for a general crop, as it is an abundant bearer.

4. Early Charlton.—Too well known to require description, having been in cultivation for upwards of a century. We notice it here on account of its great hardiness and fitness for autumn sowing, to stand over the winter. How will those opposed to the doctrine of acclimatation account for this? Originally it must have been as tender as the early frame, its constant attendant, which, like it, is also hardy; and both, with the exception of Hamilton's November prolific (which is no other than seed selected from the Charlton), stand the winter better than those of more recent origin.

5. The true early frame.—The type of the early Kent, of all the really early sorts, and probably of the next two.

8. Burbage's eclipse.—From 18 inches to 2 feet; seed large — from five to six in a pod; blue when ripe. An excellent bearer, having the young pease of a very proper size. Known also as Stubb's dwarf. Not so early as Bishop's new long pod; it is, however, a good dwarf pea for summer crops.

9. Groom's superb dwarf blue.—Under 2 feet; the most productive of its height; well adapted for small gardens, as a second cropper.

10. Woodford's dwarf.—2 and a half feet; seed medium size; very dark green when ripe; a most abundant bearer, and well suited for small gardens as a principal crop. The dwarfest of all peas are, the Spanish dwarf, Bishop's early dwarf, Thompson's early dwarf. These seldom exceed 1 foot in height, and in rich ground give fair returns.

12. Adamson's matchless marrow.—About 5 feet in height; pods curved, flattish, containing from six to seven peas. As early as the Charlton, and an excellent bearer. The following are so nearly related to it that it would be useless to grow them in the same garden — viz., tall Prussian, blue union, green nonpareil, tall imperial, tall blue imperial, tall green imperial, new tall imperial, Spanish patriot.

17. British queen. — Height from 4 to 5 feet; pods large, containing seven very large peas in each ; sometimes a single pea measuring 1 and a half inches in circumference. Hence too large for a first-rate table, but excellent for private family use.

18. Hair's defiance Knight's marrow. — 4 feet high, remarkable for its strong habit, should be planted from 4 to 6 inches apart in the rows, and each row 4 feet distant. A remarkably profitable pea, of large size, and continuing long in a bearing state.

21. Dwarf sugar, or Ledman's dwarf. — Growing about 3 feet high; pods long, cylindrical, and slightly curved; rather late, but a good bearer. To those who intend growing this section of pease, we would specially recommend —

22. En eventail. — About 1 foot in height; assuming the habit of Bishop's long pod, and, like it, branching close to the ground ; a moderate bearer.

23. Tamarind or late sugar-pea. — The best bearer, although the latest, in the section ; nearly 4 feet high ; pods from 4 to 6 inches long, proportionably broad, and slightly curved.

The French grow many varieties of edible podded peas; and although suitable to their taste and climate, they are not so with us. The Dutch grow two sorts, and even these, for the most part, are found so tender, even in Holland, that they are generally produced under glass.

The following sorts stand in good estimation amongst growers :—

"Warner's early emperor, Warner's early conqueror, early Bedalean, Essex champion, early railway (or Stevenson's railway), and early wonder, have been proved in the gardens of the London Horticultural Society to be all varieties of the old early frame, and possessing no one merit over the original. Danecroft rival, Danecroft early green, Farnes' conservative, green marrow, and the transparent pea, are by Mr Thompson considered to be all one variety. Clark's Lincoln green podded new early marrow —no marrow at all, but one in the way of the early frame. American dwarf, a good bearer, ripening about a week or ten days later than Bishop's new long pod —a very good dwarf variety. Early surprise, from a foot and a half to 2 feet in height; pods large, thick, containing generally six large blue peas, the plants having the strong stems and vigorous habits of the marrows. Early blue surprise identical with Fairbeard's early surprise. Queen of England, a sort of white marrow, inferior to the British queen. Waite's king of the marrows resembles the ne plus ultra. Great Britain similar in every respect to Knight's tall white marrow. Hunter's new marrow, about the same height as Knight's dwarf marrow; pods roundish or a little flattened, containing about six large peas ; larger than Knight's; of very sugary quality; when dry, indented ; yellowish white ; a good bearer." —Ex Jour. Hort. Soc., vol. v. p. 283.

Hi
I have been given some pea seeds, found on a wrecked ship two generations ago. They are now growing well. They will attain a height of 6ft+ and are producing some good peas. Any ideas on variety?

Hmmm ... it's impossible to tell what variety it is without more details. A lot of peas are very similar in appearance so it's hard to tell them apart, though if it grows over 6ft it's likely to be an older variety.

Hi My unknown variety of peas are now a reaching a good 7 ft. Peas are prolific. Would it help if I could send you a photo of the pea plants growing?