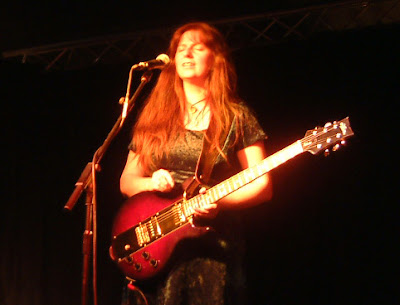 I don't have a band at the moment so I had to make do with my own guitar playing, and all the other instruments were on an iPod! It worked though ... the audience loved it and so did I.
Posted by Rebsie Fairholm at 12:56 pm

I'm glad your gig went well - I would have enjoyed being there. Your music is wonderful - your voice amazing.

Go girl. Kick up your heals and show the world your wonderful voice. It is much better than blogging on schedule.

Sent you an email re: purple pods.
Phreddy

Just found your page & now I've listened to some of your songs. You're magic! I'm Swedish & I love Swedish folkmusic, now I found you - LOVE!!! Unfortunatelly I can't seem to find your CD here... I'll look out for you! Knowing you are a garden-fanatic makes it even better!