Today in the garden .... bleeuurrgh! 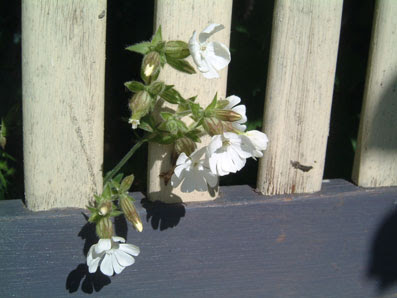 Wild white campion, grown from seed I collected locally, is one of the few things still looking good in the garden at the moment.

My garden is in a very sorry state at the moment. I have a few nice flower pictures taken over the last two or three weeks, and those will have to do for today's blog because the veg plots are a mess. Most of May and June had very turbulent weather, which has become far worse in the last week or two. It has been really bad for some people in the UK, so it seems churlish to complain about my vegetables when others have had their homes devastated ... but even so, I find it quite depressing to go out in the garden at the moment. (Quite apart from the risk of getting soaked.)

For a start I've been unable to get out there much to deal with routine jobs, so the lawn is like a hayfield and the weeds are springing up everywhere. But there's also a huge problem with disease which I've never had on this scale before. All over the vegetable beds, things are blighted, mouldy and rotting.

The pattern of the weather for the last couple of months has been constant warmth and frequent bursts of intense pelting rain. The rain barely has a chance to soak away before the next lot comes. Everything is soaking wet, pots need baling out on a daily basis, and some plants are being damaged by the force of the rain or the blustery winds. They're probably rather confused about what season it is, because they had a kind of 'summer' in April and it's been warm and wet ever since. But the biggest problem is that warmth and wet is the perfect environment for some of the worst bacterial and fungal diseases to thrive and spread. The most deadly of all these is blight, and yes – I now have blight in my garden. 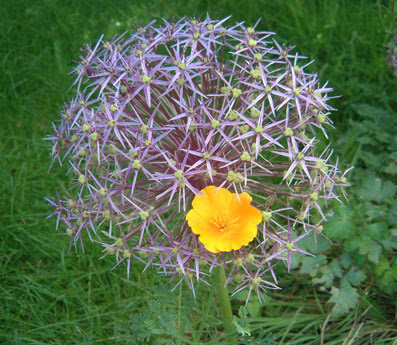 Let's look at another pretty flower picture. This is Allium christophii with a California poppy growing up through it.

I don't ever recall having blight strike this early in the season. Last year it didn't come till September. So far it's only making itself manifest on a few potatoes, but once it starts to appear it's really only a matter of time before it devastates every potato and tomato in the whole garden. It's very frustrating, because even just a few years ago it wasn't really a problem. According to Alan Romans in his Potato Book, there used to be only one type of blight in Europe, which made only asexual spores. Then a second blight type arrived in a consignment of infected potatoes from Mexico. So now blight reproduces sexually and asexually and is really having a very jolly old time at the expense of potato and tomato growers. And all the while, whichever type it is, it's mutating like the clappers. The spores are wind-borne, so there's not really any way you can keep it out of your garden. **shakes fist**

Less devastating, but still very annoying, is the garlic rust. I picked off the worst affected leaves a few weeks ago, but now the remaining ones are completely encrusted and there's not much more I can do. The orange crusty bits turn black when they're about to release their spores, so I tried to pick off all the leaves with black bits as soon as they appeared ... and it seems to have helped, because the ones I picked the leaves off are thriving better than the ones I left alone. But even so, they are all in an appalling state. It shouldn't directly affect the bulbs underground, but plants need their leaves to provide nourishment, so a really bad rust attack can choke the plants and reduce bulb size. For some reason it's only affecting the hardneck garlic. I'm growing one softneck type, Solent Wight, and that's absolutely fine (though it never produces good sized bulbs in my garden anyway). I don't know whether softneck garlic is more rust resistant or whether it's a special property of Solent Wight.

Some plants are loving the warm wet weather. My crocosmia flowers are better than I've ever seen them. And also the Somme poppies ... most days the flowers have been pelted to smithereens by the rain but they have kept producing more ... and they're bigger and brighter than ever before. Poppies have a lot of variability in their flower size and colour depending on the growing conditions, and the moist soil obviously suits them. 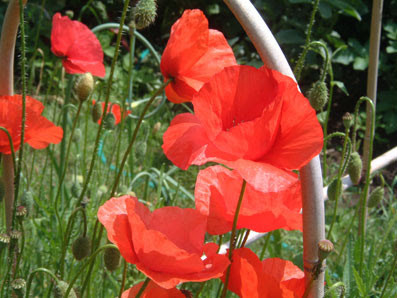 Wild poppies from seed collected on the Somme. They are doing fabulously well this year.

My blogging is a bit sporadic at the moment because I'm getting very close to releasing my album at last, and it's all gone a bit manic. I've just been working on the final-final-final mixes – as opposed to the final and final-final mixes, because every time I listen to them I hear something else I want to change. Is that mandolin too loud? Would that vocal sound better panned to the left instead of the right? It can get quite obsessive. Of course if I was a rock star I would have somebody else do all this for me, but due to a combination of thriftiness and control freakery I am my own producer and engineer. But yesterday I sent off all the tracks to the record label (hurrah!) so I can't tinker with them any more. Not that that's the end of the hard work by any means ... I still have all the legal and marketing stuff to deal with. Tsk ... I thought being a musician meant I'd be able to sit around strumming a guitar all day, but it's actually just as much work as being a graphic designer. (Oh, and that's my next job ... because I'm an ex-graphic designer I'm doing my own CD booklet design too. Aaargh!)
Posted by Rebsie Fairholm at 3:34 pm

I know how you feel - my garden looked glorious a couple of months back - now it's a soggy tangled mess! ....and in a week I'm opening my studio to the public - and visitors like to explore the garden too. Mild panic is setting in - but priority at the moment is to get all the pictures ready (it's raining anyhow so the garden will have to wait).

Good luck with the CD

In terms of the garlic, my Porcelain garlic isn't as badly affected with rust as the Thermidrome - and wasn't affected as early - but it still has rust. Looks like your Solent Wight might be special :o)