Today in the garden ... bean planting 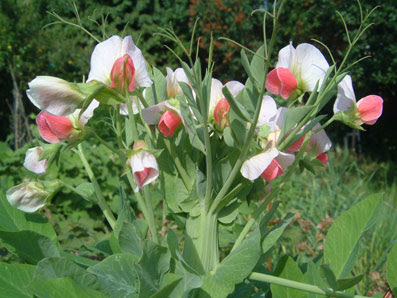 Well, you saw how lovely the Salmon Flowered pea looked last week. This is what it looked like three days later. Whoooo!

My blog has now clocked up over 10,000 visitors, almost exactly a year to the day since I set up the site meter. When I first started this blog it only got two or three hits a day, so it's grown massively over the last year. My continued and grateful thanks to everyone who keeps coming back here, and to those who are kind enough to leave comments. I appreciate all of them and it really makes me feel the blog is well worth the time I spend on it!

Today I've been busy planting out the latest batches of French beans.

Dwarf French beans (that's bush beans to my American friends) are outside my experience because I've never really grown them successfully before. Climbing French beans (pole beans) are another matter ... I've had many a good crop from those. There's not actually any difference between them other than that one type climbs up poles and the other doesn't. In the past I've favoured the climbing type because the yields are much higher for the amount of land occupied, and I used to have serious issues with growing space (I still do, but that's my own fault for buying too many seeds). But this year I'm trying out several varieties of the shortie type. What they lack in yield they make up for in earliness. Apparently. 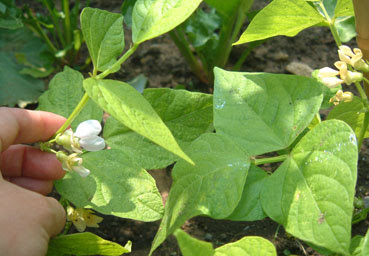 Dwarf French bean Early Warwick, a 19th century variety now very rare and hard to get hold of. The flowers start off creamy yellow (right) when they first open and then turn pale pinky lilac (left).

I have had some problems with the beans this year, notably an outbreak of halo blight. This is a rather nasty bacterial disease made all the more nasty by being one of the very few diseases which is seed-borne, and which can therefore be transmitted to the next generation as soon as the poor things germinate. It affects French beans and runners. It starts off innocuously enough ... just a few spots of yellow on the leaves. But they get bigger, the leaves go more yellow, and soon turn into brown patches with watery blotches. It spreads very rapidly, dissolving the leaves into a soggy brown mess. And if it gets onto the stems the plants die very quickly. It's not nice.

When I looked up halo blight in The Vegetable Expert it said "lift and destroy diseased plants". Well bugger that. My bean varieties have been painstakingly collected and are mostly rare heritage varieties, some of which I was only able to obtain in tiny quantities. The disposable "chuck it out and buy another" culture doesn't work for me. So I picked off the worst affected leaves, and isolated the least affected plants from the really sick ones, and each day went back and picked off any new blight patches ... tearing off parts of the leaves where necessary. Halo blight spreads rapidly in warm wet conditions, so I took care not to get the leaves wet, and certainly not to let water run off the leaves and into the soil. Within a couple of weeks the majority of plants had recovered. A few died, and I put those in the dustbin rather than the compost. But certainly the plants made a valiant effort to fight off the disease and I'm so glad I didn't destroy them. Tsk. Pesky gardening books.

Another little tip I can give about beans of all kinds is not to worry too much if the first few flowers drop off without setting pods. It seems to be one of those things beans do. After a short while they usually get their act together and start setting pods normally, but the first few eagerly-awaited flowers usually just wither and drop off. C'est la vie.

Another thing that's just about survived against the odds is my onion crop. I sowed the seed last autumn and the plants were looking very promising. But they now have irreparably bent tops as a result of having been sat on by the kitten too many times. Yes I know, but he is a very large kitten and he sits down very hard. Anyway, despite the crushed foliage they are managing to form bulbs. This one is an Italian red (obviously) variety called Cipolla di Genova. 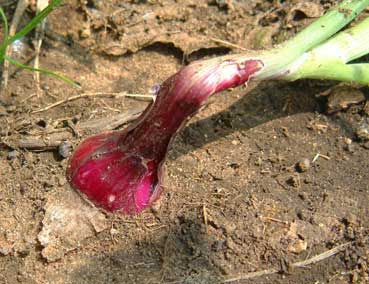 Posted by Rebsie Fairholm at 7:18 pm

Wow! That Salmon Flowered Pea is a beauty!

And many thanks to you for keeping this blog...I always learn something when I stop by ;-)

I am always bowled over by your expertise. I love your photos too. There's such a lot for me to learn. Thanks for sharing.

Thank you both for commenting!