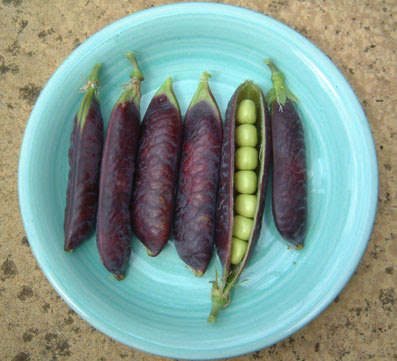 Newly harvested pods of Desiree peas ready for shelling out

I've been looking forward to trying out the Desiree peas. They are certainly handsome plants with compact, lush foliage and beautiful flowers, and the pods are a gorgeous ultra-dark purple, borne in pairs and produced in abundance. No complaints so far. I assume this pea has been bred for shelling out, because the pods are incredibly thick and go tough very quickly. The main purpose of my crop was to provide pollen for a breeding project, so it's a bonus really that I've ended up with all these pods (donating pollen doesn't inhibit pod formation, so they've developed a normal crop). At last the pods are fat enough for harvest!

They really are incredibly tough pods ... it's a job to pull them off the plants. But beautiful. And the peas inside are a luscious bright green (I have yet to see actual purple peas, although speckling is possible in some older varieties). So how do they taste after all that?

Purple podded peas don't have a great reputation for flavour at the best of times. But compared to the other purples I've grown this one doesn't taste great. It's not as palatable as Mr Bethell's Purple Podded and a long way off the juicy sweetness of Carruthers' Purple Podded. It's a bit on the chewy side too. Not hugely impressed, to be honest.

Normally I eat peas straight off the plants because they're too good to cook, but these will most definitely be going into a pan of boiling water.

Of course Desiree is the mainstay of my purple-mangetout project, and I've been crossing it with Golden Sweet in the hope of producing something fabulous. It may still do so, because I'm only trying to transfer the colour genes from Desiree and not the genes for flavour and pod thickness, and I will probably end up doing at least one backcross to Golden Sweet which will skew the genepool in a more flavoursome direction.

And also, because I had no shortage of flowers on my Golden Sweet crop, I took the liberty of making some alternative crosses. That included a number of pods crossed with Carruthers' Purple Podded, which is a tall old-fashioned purple of sublime flavour. It will be interesting to see how the two different hybrids compare in the next generation. I also have a few pods which I crossed with a green-podded sugarsnap pea, Sugar Ann, and some crossed with the eccentric heritage variety Kent Blue. 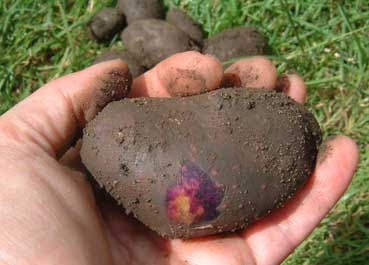 Freshly dug Shetland Black potato. It doesn't look like anything very special ... until you rub off a bit of the skin to reveal the gorgous swirly purple underneath.

One purple vegetable which doesn't disappoint is the heritage potato Shetland Black. It has the disadvantage that it's difficult to find in the ground at harvest time because it's so dark and ... well ... kinda lumpy ... that it looks like a sheep turd. As I don't normally have sheep in my garden though, I can safely assume that anything which appears to be a sheep turd is probably a Shetland Black potato.

So is it purple, or is it black, you may ask? Well it's both really. The purple is quite stunning when the spuds are freshly washed straight after digging. But the colour is not on the top surface, it's underneath, and there's a layer of thick skin over it which starts off translucent but gradually goes dark and opaque, giving the mature spuds a near black colour. The thick skin is noticeable when you eat it too ... much chewier than a modern variety. But the flavour is rich, earthy and delicious.

I have two Shetland Black crops this year. The first was started in early March, and did well to survive the frosts, so it's just about ready now. I harvested it this week because I desperately need the growing space for other things. It's lovely to have fresh potatoes again though! And I'll be reviewing this variety very soon. 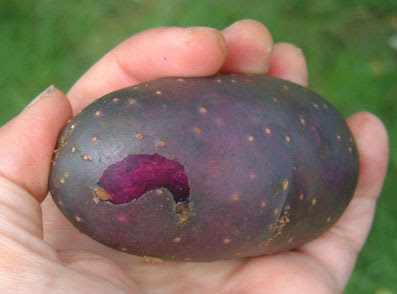 Ah, that's better! You can see here how the "black" outer skin overlays the gem-like purple underneath.
Posted by Rebsie Fairholm at 9:44 pm

The Seed Savers Exchange yearbook lists Desiree as a soup pea. Dutch commercial seed company Oranjebandzaden seems to agree, because they call it a 'capucijner' pea in their catalog, which is the name of the traditional soup pea here.

I think the main difference between Ezetha's krombek and Desiree is the latter is a dwarf variety. Most sources that have an opinion seem to think Ezetha's krombek tastes a little better. I've never grown Desiree, so I couldn't say personally.

It's too bad those peas don't taste great; they are so beautiful to look at! The purple potato, too. Lovely.

I'll check my Edzell Blue on the allotment this weekend to see if I can harvest my first purple spud!Yetholms Gypsy I'll leave as its a main crop.

Patrick -
A soup pea eh? That would explain a lot. I suspect "soup pea" is very often a euphemism for "not tasty enough to eat fresh". Thanks for the extra info.

Thanks Christa and John ... the Edzell Blue should be about ready by now, and I'm sure you will love its beauty even if not its culinary waywardness ...

Hi Rebsie, I know this is an old thread, but if you have even a couple of Carruther's Purple Podded pea seeds I would love to try them. As they come from County Down they should be given a home here in Ireland, if I can bulk them up I can pass them on to Irish Seed Savers. In return I can go through my box of seeds and see what you might be interested in - most of my seeds are from Irish Seed Savers - The Irish Pea is good repatriated from the Vavilov seed bank. I have a few excellent Irish turnip and sweeds, cut and come again cabbage and a brilliant Cork Kale which stood for me all winter!