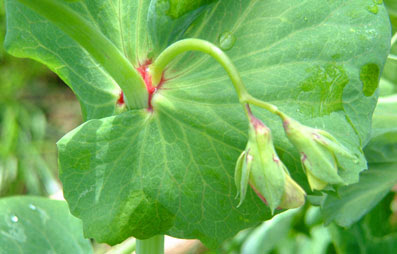 I did wonder what happened to the April showers, and now I know. They were being saved up for the beginning of May and dumped all in one go.

After two months with a dry, empty waterbutt, it rained hard enough to fill it in a day until it was overflowing all over the patio ... and then carried on raining non-stop for the next week. Just in the last couple of days there have been short periods of dry weather, but otherwise it's been relentless rain. The garden doesn't know what's hit it. Everything's stopped growing except the native weeds and grass. I'm well behind with my digging ... after weeks of barely being able to bash a spade into the bone-hard soil, it's suddenly a quagmire. Seedlings in trays on the patio are drowning in their pots. The first flush of roses are ruined. The slugs and snails have been partying across the veg plots barely even leaving silvery stumps in their wake, just empty spaces. I was growing three different yellow tomatoes and they've all been razed at ground level.

We needed some rain, but it could have done with being spread out a bit better. **waves fist at sky** 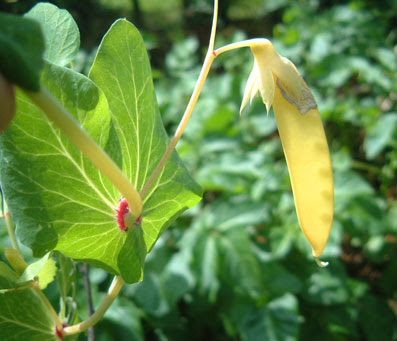 Golden Sweet: golden pods and a pretty splosh of pinky purple in the leaf axils

It's been a setback to my pea breeding project too, because the rain started just as the first flowers were coming to maturity. I emasculated a few flowers of Ne Plus Ultra ready to pollinate the next day and then the 8-day deluge came. Needless to say the flowers were somewhat past their prime by the time I had a chance to pollinate them. I wasn't able to make a start on the Golden Sweet x Desiree cross either, because the latter's flowers didn't reach the right stage of maturity before the deluge.

But anyway, I have now been able to hand-pollinate a few buds on both varieties. Desiree has matured into a very handsome plant with compact blue-green foliage and gorgeous flowers borne in pairs. It looks very pretty in the bud stage as you can see, but they open out into very large bicolour blooms with traces of dark veining in the pink petal. I will photograph them as soon as the weather permits. As for Golden Sweet, the photo above tells you all you need to know about what makes it special.

Just to make things more frustrating, I'm practically immobilised with stress-related back pain at the moment. That's the daft thing, I haven't even done anything to it ... it's just got itself so tensed up it's going into spasms, and even if it's only a phantom affliction which will probably disappear as readily as it came, it certainly bloody hurts for real. 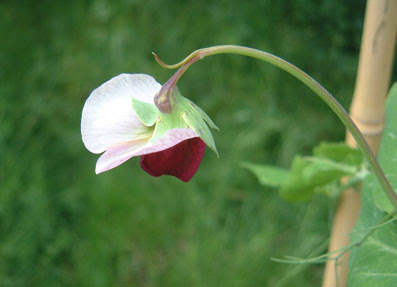 Carruthers' Purple Podded is a family heirloom from Northern Ireland, available only via the Heritage Seed Library. As you can see it is a very elegant pea, with dainty lantern-like flowers showing the pink/maroon bicolour typical of purple podders. It is unusual, however, in the shape of the calyx, which is swollen up into a distinctive heel with a strong purple flush. Some of the flush extends into the sepals but otherwise they are mostly green. Like all the other purples it has a ring of purple in the leaf axils. 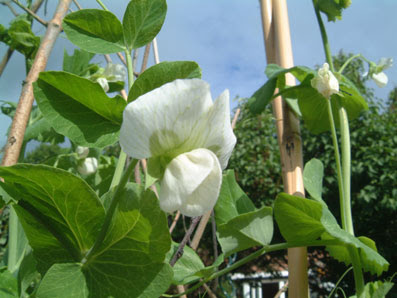 A standard green pea this time, though of the tall elegant Victorian type. This is Ne Plus Ultra, a highly esteemed pea introduced in 1847 and now quite rare, though you can get it from W. Robinson. It's one of the few heritage peas to have resistance to powdery mildew, though I haven't yet had a chance to put that to the test (the mildew is behaving itself at the moment and staying away).
Posted by Rebsie Fairholm at 10:16 pm

The Golden Sweet is stunning!

I hope your back is feeling better~ it certainly has not interfered with your ability to take beautiful photos and write interesting articles! (thank goodness!)

I am growing purple podded soup peas this year but I have heard of hte yellow kind and would love to try them - next year!

Oh and thanks for the great illustrations on pea breeding.