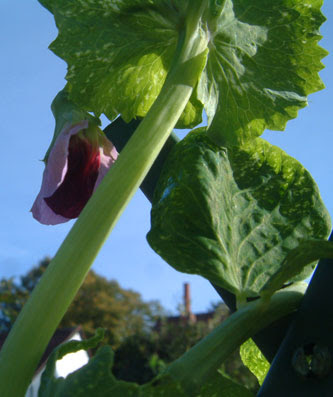 My own personal F1 hybrid, which I got by crossing Alderman with Mr Bethell's Purple Podded. The flowers have a colour different from either parent, two-tone with deep maroon wing petals underneath. This one is just opening so the colour is at its most intense. All photos taken September and October 2006. 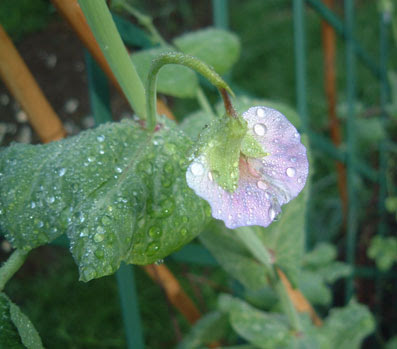 The standard petal (the wide main petal) is a kind of pinky blue, or more precisely it has streaks of pink and blue all swirled together. It looks more like a sweet pea than a culinary one. 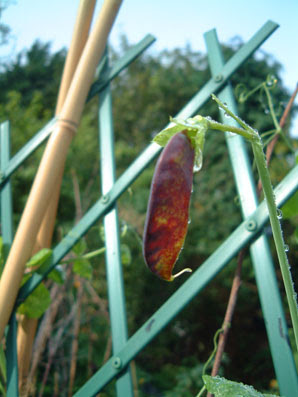 There was some variation in pod colour in this batch of plants. This one was mostly purple, but they all had some green in them too. 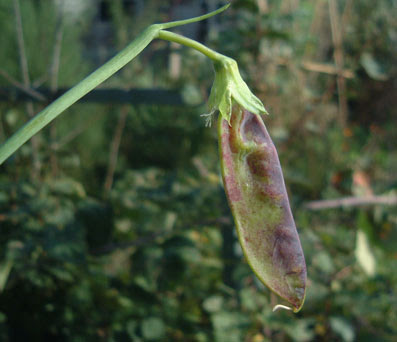 Marbled pods. There are several possible reasons for this mish mash of purple and green. It's most likely co-dominance between the genes for green and purple.

When I was planning out the project I predicted that my F1 hybrids, which are the first generation of plants grown after making the cross, would have purple pods. That's because I'd read that the purple pod gene is dominant, and so I would expect purple pods to assert themselves as the default type. And some were indeed almost entirely purple. But they all had some green in them, and they all stayed blotchy and semi-purple until quite late in their development, purpling up a little as they matured. And some just remained blotchy. F1 hybrids are not supposed to show much variation, so I was a bit surprised, but nature is full of surprises and she's no great respecter of one-size-fits-all genetic theory. And there may have been environmental factors involved too.

The blotchy mixed up colouring looks to me to be a case of co-dominance, where the dominant purple gene has found itself matched up with a dominant green gene, and their struggle for dominion over one another produces the halfway house you see in the pod picture above. There are other possible reasons for it, but in my limited experience that's the most likely one.

I'll find out more when I grow the next generation (these plants didn't survive, but I'll be growing and saving seed from more of the same). If it is co-dominance, I will know because the offspring (F2 generation) will come out approximately a quarter green podded and a quarter purple podded, with the remaining half being blotchy bi-colours like their parents. That's because when plants reproduce they inherit one half of the genome from each parent, and so each parent can pass on either the purple gene or the green gene, but not both. The result of this is four different possible combinations: green-green, green-purple, purple-green, or purple-purple. It's entirely down to chance which of these each seed inherits. Green-purple and purple-green both result in blotchy pods as the two colours fight for dominance, so they pretty much count as the same thing.

If the colour mixture is caused by something else other than co-dominance, I won't see these ratios. For instance, if it turns out the green gene is actually recessive rather than dominant, I will end up with roughly three quarters purple podded and only a quarter green. That's because the purple gene will dominate in three out of the four possible combinations, leaving only 'green-green' capable of creating green pods.

*sigh* I keep meaning to write a post on basic genetics ... then my strange ramblings would make more sense!

It's complicated but it's all great fun. 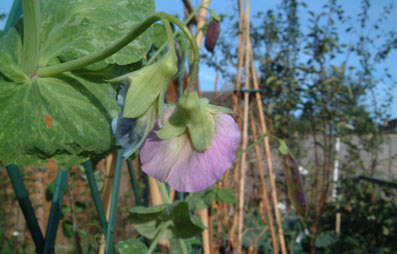 Another variation: one of the plants produced two flowers per node, as shown here (the blue flower is older and has started to fade). This is a trait not usually seen in either parent.
Posted by Rebsie Fairholm at 8:56 pm

I remember some genetics from a course I took in college. We didn't have time to cross peas and see what happened, but still learned quite a bit. Your posts on breeding your own vegetables are fascinating!

I bet you could find someone else's description of inheritance and just link to it. :-)

Saving time/energy for description of your own experiments, which info cannot be found anywhere else....

After my question yesterday about the hardiness of peas, I went back and read all your posts that I missed [mumble, grumble @(*#%% google desktop humph], and found the answer. Yes, hardy, but better results if at least germinated in warm conditions.

I know I soaked them, at least, part of the time, but I never waited till they sprouted.

I do find this all fascinating - however the purple podded peas I intend to grow this year will be to include in my flower bunches - an experiment but not a genetic one.
I usually lurk here but have finally sorted out my links bar and thought you'd like to know you are on it,
Best wishes
Jane

Interesting post Rebsie. Co-dominance could be one of the reasons you got this result but there are other genetic reasons too to explain this.

Co-dominance is also seen in the female tortie cat that has both the gene for red and the gene for black. The tortie pattern is totally random, some have lots of black and hardly any red or vice versa. Your peapods show this too.

We'll just have to wait and see what the next generation will do.

thankyou for visiting, sorry your pony is no longer driving, try the Parelli aproach, takes time but as you see Smokey never puts a foot wrong.
fascinated with your purple pea, will be back to check up on progreass!