Today in the garden ... the ginger peril 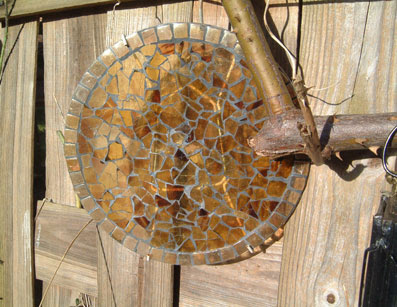 One thing you don't expect to see when you open your curtains on a Sunday morning is a strange man rummaging around in your privet hedge. But there he was, standing on the grass verge which borders our front garden with his head stuck deep in the foliage. But when he looked up and saw that I'd spotted him, instead of running away in embarrassment he came and knocked on the door.

"I lost my car aerial in your hedge last night," he said. "Mind if I have a look for it?"

Um ... how do you manage to lose a car aerial in a hedge set back from the road by about ten feet?

"Well, it was dark. And the aerial's black."

Whether he was a nutter or not, there was indeed a black car aerial in the hedge, and he delightedly scuttled off with it.

Meanwhile, in the back garden, we have another mysterious interloper.

I first suspected something was getting into the garden which shouldn't be there when I started to find bones in the vegetable patch. First there was one in the asparagus bed. Then another, half buried in the plot I'm preparing for my peas. Big, chunky bones with sawn-off ends. Well they ain't mine, I'm vegetarian.

My suspicions were confirmed when an enormous trench was dug in a tub of overwintering carrots and a large soggy partially masticated dog chew deposited in the hole. I recently read a post on John's Spade Work blog about a German Shepherd who had taken to harvesting his own carrots, so it's obviously not just me. I eventually found a small gap at the bottom of the chainlink fence, probably just big enough for next door's small white terrier-type thing to squeeze through.

However my garden is facing a new peril which is causing more damage to my plants than all the slugs, snails, dogs and other pests put together. It's our ginger kitten. He's a gardener's nightmare. He digs up or bites the heads off all my seedlings. He wees in my flower pots. I can't plant anything anywhere without it being interfered with. When I tried to protect my sweet peas by making a thicket of prickly branches around them, he stripped the prickly stuff off with his teeth and then crawled in and bit the heads off all the peas. He's such a little hard man, I even saw him gleefully chewing on a bramble the other day. 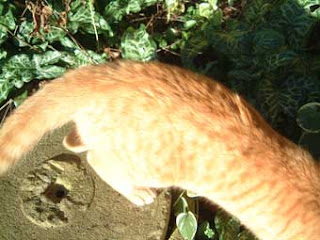 He was slightly less macho last week however, when he somehow fell down a gap between two fences and couldn't get out. It was dark and tipping down with rain, and I could hear this desperate pitiful squeaky mewling. Unfortunately I couldn't get to him ... he was too far down for me to reach and the area was tangled up with brambles. The fence was too high for him to climb. Eventually though he managed to scramble half way up, just high enough for me to grab him. And of course managed to cover me with muddy footprints.
Posted by Rebsie Fairholm at 11:46 pm

We have two female ginger cats, and have the same problem!

We live in the center of Amsterdam, and have both a small garden and our roof where we grow things in pots.

We have taken to growing edible plants on the roof, and letting the cats out in the garden where they end up killing most of the plants there anyway.

We've long ago given up on indoor plants! Those were getting weed on too...