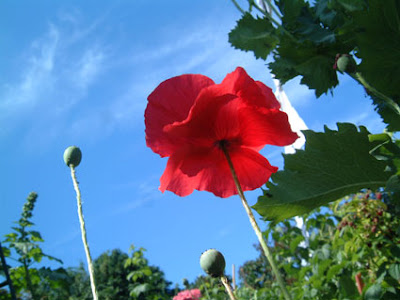 I managed to get outside today and get on with some weeding. Even at this time of year when there are very few crops growing, weeding is a delicate business for me and has to be done carefully. That's because I'm selective with my weeds. In all the veg beds I allow annual flowers like poppies and calendula to self-seed. I've had to get good at recognising different plants at the seedling stage, so that I know what's what. Field poppies like the one above have not really got started yet, but I have quite a few California poppies which have successfully overwintered and there are also some new self-seeded opium poppies, so I have to carefully hoe around all those. I love opium poppies; not only do they have the most beautiful colourful mop-headed flowers but the bees go absolutely nuts over them. These pollen-rich flowers are a good thing to have in the vegetable plots because they attract hoverflies, bees and other beneficial insects, quite aside from looking gorgeous. The result is a mini-ecosystem with lots of biodiversity and natural pest resistance, thrumming with life. I don't subscribe to the idea of having a separate flower border and vegetable patch. In this garden it all gets shoved in together.

I'm also careful to preserve any scarlet pimpernels I come across, at least until they flower. Now that probably does seem a bit mad, because the scarlet pimpernel is a bogstandard weed in the UK with pretty flowers but no obvious garden merit. But mine are special.

When I first moved here in 2004 and the whole garden was laid to lawn, I spotted something with purple flowers growing through the grass just as I was about to run the mower over it. It took me a moment or two to be sure it really was a scarlet pimpernel because I've never seen one with any flower colour other than the usual creamy scarlet-orange. I spent the rest of the season carefully mowing round it, which meant I had a weird sticky-up tuft in the middle of the lawn all summer, but needs must. 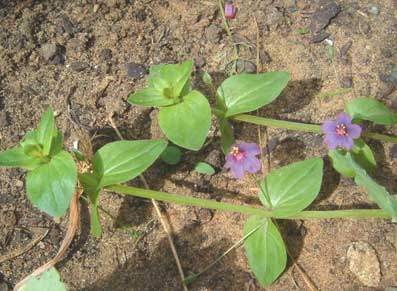 I know nothing about the genetics of scarlet pimpernels. And I don't suppose anybody else does either. Research on plant genomes is limited almost exclusively to economically important crop plants, and there's not much funding available for garden weeds. So I can only hazard a guess at why this plant had purple flowers. It could be a recessive gene which is commonly present in the landrace (wild plant population) but rarely gets a chance to express itself. Or it could be a spontaneous mutation, a natural "mistake" in the plant's DNA. Either way, I only had the one plant so my only option was to save its seeds and hope some of its offspring would be purple. There was no guarantee at all that they would be.

In 2005 I spread the seeds around the garden and let nature do its thing. To my delight, several of the plants turned out purple-flowered. I started weeding out any 'normal' scarlet flowered pimpernels and just left the purple ones to mature and self-seed. In 2006 there was another increase in their number.

So now I appear to have my own strain of purple pimpernel. If you're wondering what's the point, there isn't one. I just like having something different in the garden even if it's a weed. And why not? I don't know how common purple pimpernels are but it's something which my garden gave me spontaneously, so I treat it as a gift.
Posted by Rebsie Fairholm at 7:27 pm

Just stumbled across your blog and I like it a lot. I also combine veggies and flowers together because I think it's fun.

And, like you, I find some *weeds* to be very pretty. Love the purple pimpernel!

I was delighted to find your blog about the purple pimpernels. I have a lot of the usual orange ones growing in my garden (they do have a spot of purple right at the center attachment of each petal). Also like you, I let flowers grow amongst my veggies (within reason), and around the edges of the veggie beds (but I don't have regimented veggie beds - my veggies are scattered all around the property - front and back, as part of the overall landscaping). California poppies abound, as do johnny-jump-ups (aka violas), marigolds, calendula, cosmos, Mexican primroses, nigellas, and more. I don't have any opium poppies - they are beautiful, so I might look into sowing them around the garden too. I do have a matilija poppy (aka tree poppy, a California native) that grows very tall - mine is about 8 ft tall now. But it doesn't reseed as do the smaller poppies.

Hello,
I have a garden here in France equidistant from Geneve, Grenoble and Lyon - an alpine area. I found what I would call blue scarlet pimpernels growing in the wild here years ago and have also found one plant in part of my garden. Like you I encouraged it and discouraged the red ones in that particular part of the garden (been here about 4 years), and now have a good patch. This summer (2016) I found nearby a pink pimpernel which I have never seen before, so I am going to encourage that as well. Maybe, if successful and you would like, I can collect some of the pink seed to send to you.
The local farmers' shop sells a selected blue pimpernel which is a bit bigger and without the grace of the wild plant.
Regards,
Michele Bland.