Today in the garden ... an update 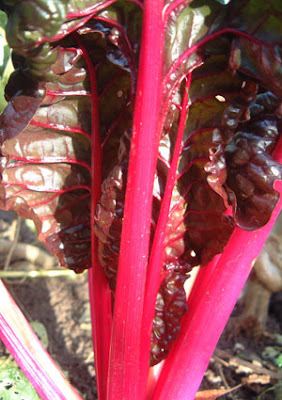 Ah, good old leaf beet. Not only is it one of the few vegetables still productive at this time of year, but it easily wins the title of prettiest plant in the garden, looking quite surreal in its flamboyance like a Spanish carnival stuck in the middle of the soggy brown winter squidge. The intensity and luminosity of the colours has to be seen to be believed, and the camera can't do justice to it. Some of the stems are two-tone, pink round the outside and orange up the middle. Rainbow chard as we know it has been grown since Victorian times at least, and a bright red form of it took Aristotle's fancy back in the 4th century. Most of the rainbow chard seeds available today are Bright Lights, which is sometimes sold as an heirloom variety but is actually a modern improved strain.

Leeks are also looking plump and happy ... they ain't huge but I ain't fussy. I harvest them as required. Meanwhile the purple sprouting broccoli is growing well, still producing leaves rather than flower tops. The whitefly have taken up residence but are not too bad at the moment. 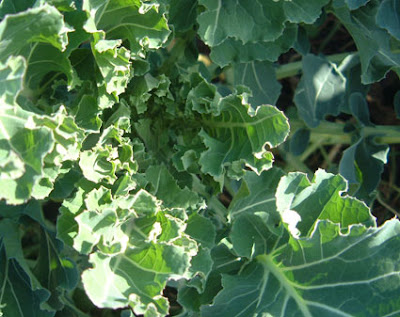 Purple sprouting broccoli. I know, it isn't purple or sprouting at the moment but it's getting there.

The snowdrops and crocuses are coming out and so is the hellebore. They may be regretting it now that the weather has turned wintry for the first time, but we haven't had any of the snow that I've been seeing on other British blogs. I've had a nasturtium growing on the patio since last summer, which was still quite green and robust until the recent cold snap, and it's still just about clinging on to life. I've never had a nasturtium survive into January before.

My home-made cold-frame (I use the term in the loosest sense because it's really four slabs of old window glass held together with luck, gravity, flowerpots and clothes-pegs) is currently nurturing seedlings of onions and broad beans. When we moved into this house I removed about 3 miles of net curtains from the windows and they are now coming in very handy as a substitute for horticultural fleece, or floating row covers as they're sometimes called. They even have floral patterns on them. What more could you ask for? I admit they do look a bit strange out in the garden, and I feel a sentimental twinge of guilt at what the lovely old lady who previously lived here would think if she saw how I was abusing her curtains, but they do work extremely well and it's a good way to re-use and recycle old fabric. 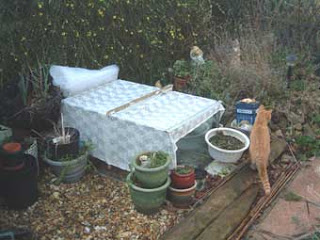 My "cold-frame", with the old lady's curtains, optional bubble-wrap roll-top, and ginger kitten included for scale. (Needless to say, moments after this photo was taken he put his great clodhopping feet straight through it ... grrrrr!)
Posted by Rebsie Fairholm at 1:14 pm