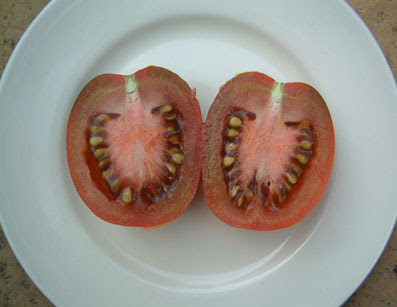 First up, I think there may be two different varieties of tomato called Black Plum. I've seen them described in some online catalogues as small or cherry-sized. The ones I've got are a good full size plum and quite chunky and I don't think they're the same, although they may be strains of the same cultivar.

The word 'black' when applied to tomatoes can refer to anything from russety-red to smokey purple, though never actually black. In the case of Black Plum it's really more of a muted chestnut red with green flambéed shoulders. The insides are a dull greyish red and incredibly fleshy. The fruits form bell-shaped plums, blocky at the top and rounded at the bottom, which are dense and heavy and stay firm to the touch until fully ripe. You certainly get plenty of substance from them and plenty of dark juice and slippy gel in the middle. The flesh is succulent with a slightly grainy texture. Flavour is mild and sweet with a black tomato muskiness.

My own preference is for acidic tomatoes, so I must confess Black Plum in its raw state is not to my tastes at all. I also found the graininess a bit of a turn off. But if you like sweeties and don't mind the mealy texture then you might find it more tasty than I did. I mostly used it for cooking, which it seems readily suitable for and imparts a slightly dusky hue to sauces. Because of its thick flesh and mild flavour it's good at adding substance and big tomatoey chunks to a dish but there's no corresponding zingy taste. 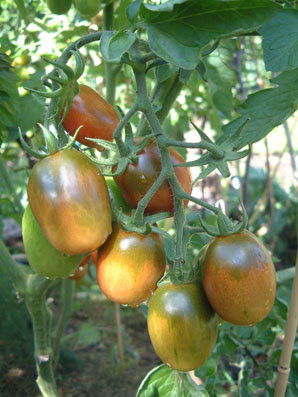 In the garden Black Plum plants are extremely vigorous and voluptuous, and it's essential to give them adequate support bearing in mind that they produce a multitude of solid, heavy fruits. The plants are dark green and hairy and reach at least five feet tall with rampant side-branching and abundant flowers ... they are larger and heavier than any tomato varieties I've grown before. The fruits grow in very orderly clusters of about six or eight. Trusses have thick stalks with very pronounced 'knee-joints', and the calyx has long upward curling sepals. Flowers are also large and produce copious amounts of pollen even on cool days, so fruit set is not a problem. The fruits swell quickly but seem to take a while to ripen, and once picked their keeping qualities are not great.

In terms of pollination issues, the anther cone is quite open at the tip and the pistil is flush with it, so I would think there's some risk of cross-pollination with other tomatoes. If you're saving the seeds and want to keep the variety pure you may want to isolate it from other tomatoes by a few feet at least.

My plants succumbed to blight, as did all my tomatoes, but it was one of the last to be affected and the disease took a while to really get a hold. On the whole it's a robust and trouble free plant and the yields are very generous.
Posted by Rebsie Fairholm at 5:49 pm

Sounds like a great sauce-tomato! Every year we make up masses of sauce (well, puree, really, I guess) to keep us in pizza-topping through the year. Care to swap some seed?

Yes, I'd be up for doing a seed swap.

We grew a dozen plants of Black Plum this year. They all grew to eight feet and produced (literally) bushels of fruit. They made great flavourful sauce that was a red-brown colour, sure beats a jar of Prego!

This variety looks and sounds very similar to one I'm growing - Debarao Black. Photo and description here:
http://oca-testbed.blogspot.com/2010/08/high-summer-miscellanea.html
I will have seed to swap if anyone is interested.

Good review. I'm growning these on my balcony this year. Two plants in the same 50 liter pot (!), but they're doing quite well. Despite the abundant rainfall this year, and lack of sunshine, the plants are producing quite some fruit.
I agree with the tomatoes being a bit mealy. The flavour is not bad, but a little flat. Fruits picked later in the season do taste great though. Have a look at my pictures

Do you mind if I link to you from my cooking country life blog. You have awesome detailed information on your garden and I would love to share that.