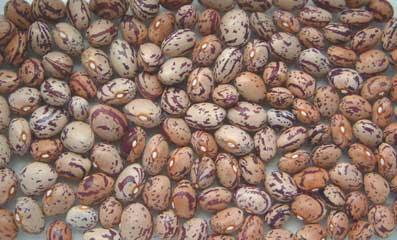 According to the HSL catalogue, this variety has been cared for by Bristol allotmenteers for a number of years, and they got them from a lady called Doris Fortune who loaned part of her garden to a retired head gardener. He had apparently grown these beans in the gardens at Windsor when he worked there. It may or may not originally have been a commercial variety.

Whatever its provenance, Mrs Fortune's climbing bean is notable for its pale green pods with mottled blue streaks, and its dried beans which are an intriguing pale buff colour with whorls of deep maroon-blue. And also for its generosity: the plants grow to at least 6 or 7 feet tall and would probably keep going given a chance, and the yields are mad.

As a garden plant, Mrs Fortune's is not much of a looker, poor dear. Her leaves are quite tidy and symmetrical and slightly raspy like a cat's tongue, with a slightly anaemic pale green colour, and growth is rampant and sprawling. Flower buds are green with a half-arsed splosh of mauve. Not really one for the ornamental borders. More strangely, the whole plant sags at night. It just goes all floppy and the leaves droop. Every single evening, whatever the weather, like it's tucking itself in for the night. And it interprets 'night' very loosely and starts to look like a stack of discarded hankies by tea time on a summer's afternoon.

But things start to pick up from the flowering stage onwards. The flowers are two-tone pink when they open, fading to mauve, and are quite pretty. Then come the pods, which are bright green and fairly wide and flat with a little curly tail. Around the time the beans start to swell the pods develop a blue streaky pattern. The blue becomes very dense and dark on pods exposed to direct sunlight, while the hordes tucked away inside the foliage only develop a shadow of it. I should point out that the foliage is so voluptuous there's no possibility of any sunlight getting through it. 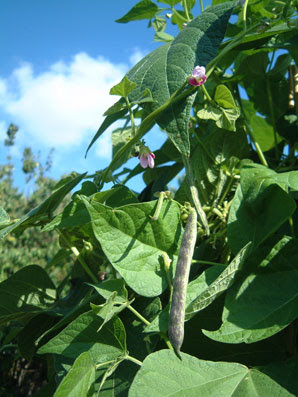 You have a choice with French beans: you can eat the whole pods while they're young, or you can let them mature and shell out the beans to eat fresh, or you can shell them out and dry them. Mrs Fortune's is useful for all three. The pods are palatable and stringless when they're small, and only start to get fibrous when the beans inside have reached a fair size. There's no shortage of pods though, so you can eat them at whatever size you like. When cooked they keep their bright green colour (but not, alas, the blue streaks) and are firm and juicy. Not, however, the best I've ever tasted ... just a little bit on the bland side, with a very slightly fuzzy texture on the pod surface.

My personal favourite way to use them is to wait until the beans have reached something near full size, then quickly shell them out and chuck them in a pan of boiling water for 5 or 10 minutes for immediate guzzling, with butter. Shelling them is a bit laborious because the pods are still very fleshy and succulent at this stage, but it's worth it. Texture and flavour are wonderful. The beans are greenish white and rounded like a haricot. If left until fully mature, the blue streaks turn maroon ... while beautiful maroon splodges appear on the seed coat inside, which darken to a purple-blue when dried. The greenish white dries to a nice warm tan colour. This may be the way Mrs Fortune's climbing bean is bred to be eaten, as a soup bean for adding novelty and substance to gloomy winter stews. 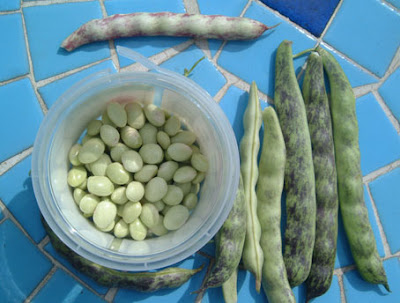 Anyway, it's the most vigorous, robust, rampant, dependable, high-yielding bean I've grown so far. No bother at all from pests. It survived storms and cold weather and stayed productive well into the autumn. It's not a first choice for fresh pod flavour but it has so much else going for it it's really well worth growing.
Posted by Rebsie Fairholm at 11:59 pm

That's interesting ... I'd like to compare them some time and see if they're the same.

Eleven and a half years on and I'm growing Mrs Fortune's with seed from the Heritage Seed Library. I agree totally. It's great as a shelled bean - lovely plum, tasty beans - and wonderfully productive. I haven't noticed its sulking in the evening but will observe....