Today in the garden ... smugness 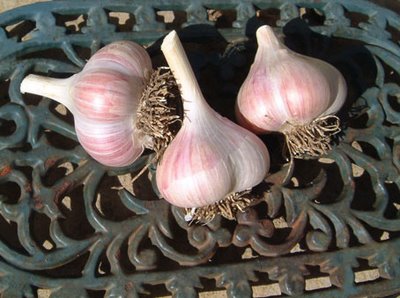 I'm well proud of this year's crop of garlic ... this variety, appropriately enough, is called Music.

This year I experimented with a different method of growing garlic. It seems to have paid off too, if this crop of Music is anything to go by, grown from cloves saved from last year's crop. They look just like shop-bought bulbs and they taste phenomenal. I've also had very positive feedback from the people I've given them away to. Music is a continental-type, which has a slightly different bulb structure from 'normal' garlic. It has between two and five very large fat cloves, which only keep for a few months but taste exceptional. I suppose its relatively short shelf life is the reason you don't often see it in the supermarkets, but it's worth seeking out.

The definitive book about garlic has got to be Ron L. Engeland's Growing Great Garlic, which is written with the expertise of someone who makes a living from garlic farming and the passion of someone who genuinely loves and respects the plants. It's a wonderful book. And one of the things he describes is how he grows his garlic in low ridges, a bit like potatoes, rather than the conventional planting in flat ground. I don't know why this should work any better, but I thought if that's what Ron does with his own plants then I'd like to try it too, and it does seem to have produced some beautiful results.

They were grown in ground which hadn't been manured, and I didn't feed them much ... they don't seem to need it. They just got watered during very dry weather. Another tip I picked up from the fruits of Ron's experiments is removing the flower scape at a later stage than is normally recommended. He suggests leaving it until it forms a loop-the-loop, so that's what I did. Logic would suggest that leaving the flower to develop to that extent just wastes energy that would otherwise go into forming the bulbs ... but as you can see, they've come out plump and perfect. 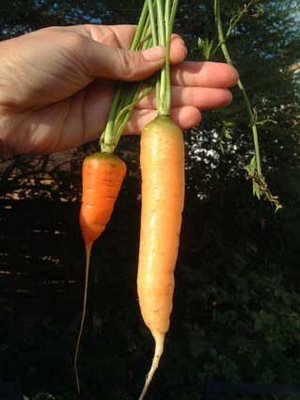 I'm also succumbing to carrot smugness having harvested these two beauties. The only downside is that this is the entire crop, for the moment at least. I do have others still in the ground but they look more like pipecleaners. However, I'm smug anyway because this is the first time I've ever successfully grown a carrot, having been trying on and off since my parents first let me take over a section of their garden in the late 70s. Yes, the one on the left is supposed to be small and wedge-shaped, it's a Chantenay, a French variety which has been around since 1830 and is still one of the best-flavoured ... there's even an official website devoted to it. The one on the right is a light orange specimen from the mixture which Chase Organics sell as Rainbow Carrots. Others will allegedly turn out mauve, purple or white, though at this rate I may need a magnifying glass to see them.

These two carrots came out flawless and tasted wonderful.

Despite the wonderfulness in my own garden, I can't help gazing in awe across the road at the old geezer's runner beans which are visible by virtue of being about 8ft tall. And he's also got something else unbelievably enormous growing in front of it ... looks like some kind of kale. God, aren't I nosey? 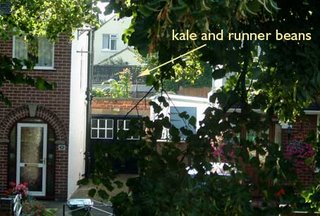 And lastly, an update on my pea-breeding experiment. The first of my F1 hybrids (Alderman x Mr Bethell's Purple Podded) is in the ground and growing like a rocket. Peas shouldn't really display hybrid vigour, because inbreeding plants generally don't, but it's certainly got some vigour from somewhere. I have eight more growing in bog-roll tubes waiting to be planted out ... they've all germinated but some are a bit small as yet. For some reason the hybrid seeds have been ridiculously slow to germinate, so I'm going to have to hope for nice weather this autumn to bring them to maturity. The good news though is that they are all showing faint streaks of purple on the early leaves. They may or may not turn out to have purple pods (it doesn't matter anyway with the F1 generation ... it's the subsequent generations I'll be selecting from to get my new variety) but the main thing is that they all have the crucial gene that enables them to produce purple. 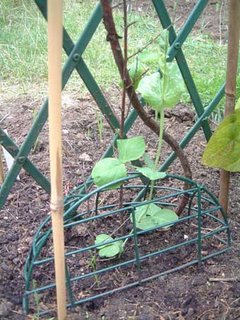 Posted by Rebsie Fairholm at 12:23 am

You are certainly entitled to smugness, after all the work you've put in!

And -- nosey would be if you were hanging off the top of his fence, staring over. Anything that is visible from across the stree is ok to look at. :-)

Just go over there, knock on the door, say you're a veg grower, and have been admiring his beans, and can you have a closer look.

The old fella'll be deligheted I have no doubt....could be the start of a beautiful friendship!

Heh, you're quite right Greenmantle ... I ought to invite myself over there. But I may just have to ask the bloke next door to fix it up ...