Today in the garden ... harvest time 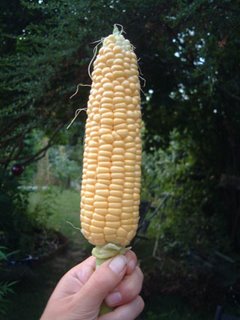 Just showing off my Swift F1 sweetcorn, which is as big as any supermarket cob and far tastier. Not bad for a crop which supposedly doesn't appreciate the British climate

I've had a lot of catching up to do after my time away ... lots of weeding, deadheading and propping up things that have collapsed under the weight of their own abundance.

You may remember I've been ripening up a potato apple I found on one of my Marfona plants. Well, it's about as mature as it's going to get so it's time to extract the seeds from it.

There's precious little information out there about raising new potato plants from seed because not many people do it ... but it's basically the same as for tomatoes. The advantage of growing potatoes from seed is that they are likely to be free from any virus (unlike tubers, which store viruses very efficiently!) and it's also a voyage of discovery because every seed is potentially a new variety, with no two being quite the same.

Just slice open the ripe potato apple (it's ripe when it just starts to go soft) and scrape the seeds out into a container of water. Any seeds that float are not viable and can be got rid of. Wash the sinkers to remove all the pulpy goo (a sieve or tea-strainer is probably the best way to do it) then spread them out to dry thoroughly.

As they're not hardy, I'll have to wait until the spring before I can sow them. 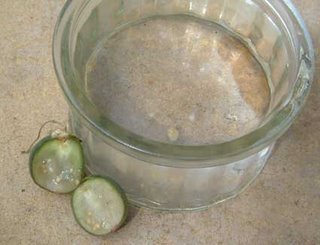 Marfona potato apple: it looks like a tomato from the outside ... and it's not dissimilar on the inside too. The seeds look like small tomato seeds and are easy to extract in a jar of water.

At last, one of my F1 hybrid experimental peas has germinated! I'm so relieved. It was one of the ones I sowed fresh from the pod into high quality coir and vermiculite. I've also got another batch started off in bog-roll tubes as per my usual method, and I'll see what happens to those. These are ones which I'd allowed to dry out before sowing them ... I want to see whether that makes a difference.

At this time of year lots of stuff is ready to harvest. I pulled up the Hysam onions today as it's been a couple of weeks since their foliage flopped over, so they're about ready. 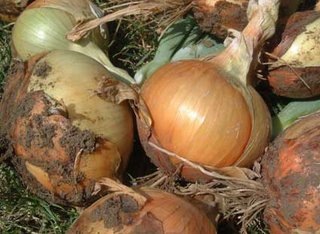 Hysam onions drying in the sunshine

I've got more French beans than I know what to do with, and I've started to let Mrs Fortune's develop mature beans rather than keeping on picking the young pods. The plants have rather cheekily lashed themselves around some adjacent bamboo frames, having outgrown their own (7ft) supports, and are trying to take over the garden by stealth. I now have funny little blue-streaky pods growing among the tomatoes ... 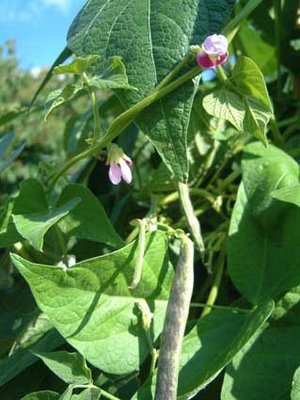 And there's more weirdness among the tomatoes. I notice one of the developing fruits on Black Plum has a strange appendage growing out of it. Not sure if it's trying to grow into a spare tomato or what. Anybody else had something like this?

Black Plum also has the distinction of being the healthiest and most rampant of all the tomato varieties I'm growing ... it's already over the top of the bamboo frame I made for it way back when. At the other end of the spectrum, my Pink Jester plants are looking very straggly and distorted and two of the three plants have elongated fruits which are not true to type. I dunno why that is, because they're from the same batch of seed I've sown for the last few years. They're oddly elongated with pointy tips, like peppers. Very curious. 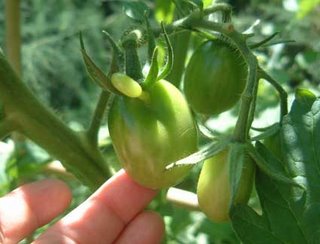 Corn jealousy is overtaking me! I've got some Swift F1 on the allotment but I don't think it'll be that size by the end of the week when I next visit.

Oh dear, I read about your disappointing Swift crop on your blog (I have tried to post comments, by the way, and they just seem to disappear into the aether when I post them, for some reason).

Still, if you do get any cobs fit to harvest I don't think the flavour will disappoint.