Today in the garden ... after the deluge 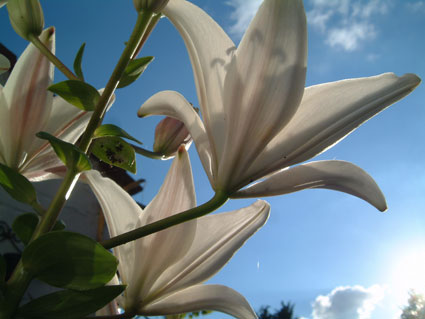 Just as it looked like we were in for a summer of extreme drought ... the rains came. It rained non-stop for 24 hours. And I don't mean normal rain. It was torrential and there was no let-up in it at all. I was woken up again and again during the night by the noise of it pelting on the roof. I fully expected to open the curtains the next morning and find the house had floated off down the street. But no ... the pavement outside was impassable (our street has a double grass verge which acts like banks in wet weather and turns the pavement into a river) but we're still in the same place. And apart from a snapped-off top on one of the Martock broad beans and some very bedraggled roses, there was hardly any damage in the garden. Just a lot of baling out on the patio where a lot of the plants were floating in their pots.

And my rainwater butt, empty since April, has certainly filled up!

But now the weather has cleared a bit I've been able to get out there and do my daily inspection. The daily inspections are taking a little longer at the moment as I pause along the way to stuff my face with fresh produce. Raspberries, tayberries, peas, blackcurrants, then more raspberries. 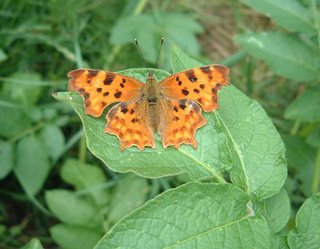 I chanced to have the camera in my hand when I spotted this beautiful bright orange butterfly on some Mr Little's Yetholm Gypsy potato leaves. Butterflies are outside my area of expertise but I think this one is a Comma.

Peas are still the main focus for me at the moment. I'm not sure how well my hand-pollinations have taken. The pods are developing nicely, but the peas inside (which you can see if you view them against the light) are very small, and even those that are developing normally only have a couple of peas in each pod. To some extent this is normal ... hand-pollination is quite hit and miss and it's usual for some of the pollinations not to take. It's just a matter of doing lots of them to ensure enough material for my experiments. But there are factors which may make a difference to the success rate. One is the weather ... peas pollinate much better when it's cool and I did mine on blazing hot summer days. Another is a possible mismatch in the maturity of the flower parts. I have been emasculating the buds at a very early stage to ensure I catch the male bits before they shed any pollen, and there's a strong possibility that at this stage the female part is not yet receptive either. The solution to this is to emasculate the buds a day or two before I do the hand-pollination, which will give the stigma a chance to mature. Worth a try, anyway. I will just have to do lots of pollinations and see what works. 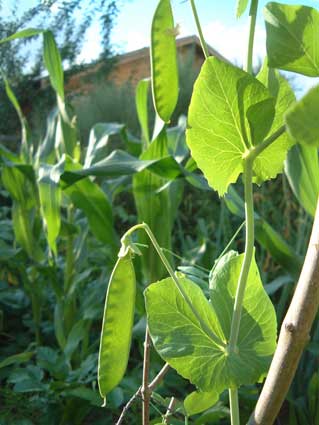 Champion of England is looking fairly typical of an old-fashioned tall pea. The flowers are small-ish and a very slightly creamy white. And it has long, long pods which look like they're going to have 9 peas in them.

The moment has come: I sampled the first raw mangetout pod from Mr Bethell's Purple Podded. Um ... being brutally honest, the flavour was a bit on the weak side ... not to mention slightly earthy and bitter. I ate a similar sized Alderman pod for comparison, and the purple one was noticeably poorer (although it certainly looked a lot more exciting). I will have to try them cooked when I have enough of them. But even if they turn out to taste horrible in every form, it's still worth my while growing them as a heritage variety and as breeding stock. Because I'm guessing the main reason purple peas taste less good is that all the breeding work in the last 150 years has focused on green varieties. Given that the gene for purple colouring is dominant, I see no reason why the colour can't be bred into some existing sweet plump green varieties.

Here are a couple of oddities I have in the garden at the moment. 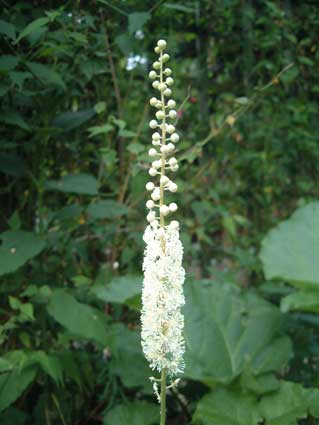 Americans may recognise this, but it's rarely seen in UK gardens. It's Black Cohosh (Cimicifuga racemosa) which is a powerful hormone-balancing herb much prized in Native American medicine. It likes to grow in damp shady places and it produces an effervescent-looking white flower spike which flowers from the bottom up, like a sparkler in reverse. From Poyntzfield Herbs 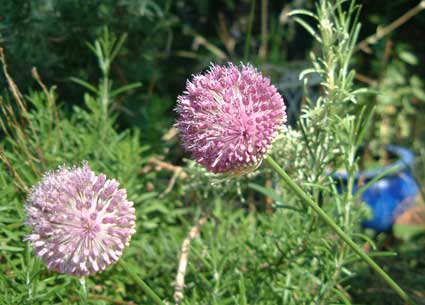 This is Allium guttatum ssp. dalmaticum, which is so rare it doesn't have an English name. It's an ornamental member of the onion family. From Rare Plants
Posted by Rebsie Fairholm at 8:13 pm

That is an unusual one - I trust that you will save the seeds then.

Wish I could type more, but I am so tired that I can hardly see!

I will save some seeds ... although it will probably take another two years for them to flower.

Thanks for commenting. I'm always delighted when people tell me they enjoy my blog!