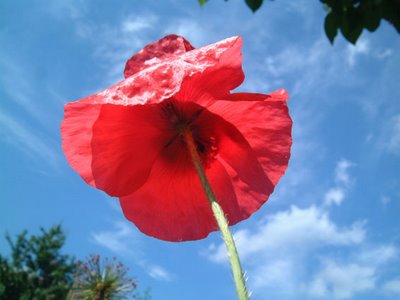 Self-seeded field poppy (Papaver rhoeas). This is the same flower that was shown as a bud on my June 2nd post.

The sky exploded early this morning (well, not quite, but it sounded like it) and resulted in a ferocious deluge. It saves me watering the garden this morning, a job which was becoming a twice-a-day necessity in the recent heatwave, but I wish I hadn't left the cushion out on the garden bench. Oops. Soggy arse for the next person who sits on that.

The rain smacked the heads off all the remaining oriental poppies, so no more pollen-diving fun for the bees. They did very well this year though because they mainly flowered during the dry spell. At its peak the orange Allegro poppies had 19 flowers at once, all of them the size of my hand. They may only last a couple of weeks but they are stunning. And just as they are going over, the annual poppies are coming out (see above). You never know what colours you're going to get with annual poppies, which is one of the reasons I love them.

No sooner had I written that when one last bud of oriental poppy Princess Victoria Louise came out. And so did a whole load of brown butterflies. I even managed to photograph them together. 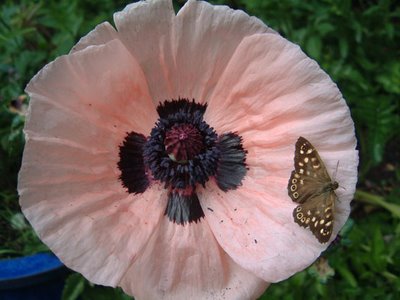 And there's no shortage of frogs now. As I was walking down the garden path this morning something landed with a great splack right in front of me. A very knobbly frog with a green head and a black back. Thought it was a toad at first, but it wasn't quite that knobbly.

I know it's getting a bit late for sowing stuff now, but I've just had some tomato seeds through the post from America. Unusual varieties which you can't get over here. Two of them are marbled and striped in red and yellow, the other supposely looks like black cherries. They sent me a freebie packet too. Bless.

I have this nerdy obsession with seeking out the unusual ... can't just go down the garden centre and buy normal stuff like everyone else. It cost me more in postage than for the seeds themselves, but I don't care. I'll have the only marbled and black cherry tomatoes in Cheltenham.

I do have a minor concern about buying seeds from America though ... there is such widespread use of GM material in the US, most of it unlabelled, I wonder how much stuff over there gets accidentally cross-pollinated. I don't have any means of testing for it and I assume the risk of GM contamination is small, especially with tomatoes since they're natural inbreeders (i.e. they usually self-pollinate). But if anyone knows anything about this issue I'd be grateful to know. 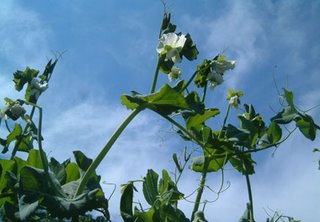 The Alderman pea is still going nuts. Advertised in the Organic Gardening Catalogue as reaching a height of 5ft, mine is now just over 7ft. And those tendrils are still reaching for the sky. I'll be posting another pea-specific report shortly. 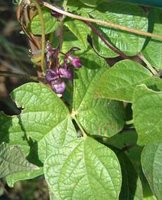 My climbing French beans are all coming along nicely now, having benefited from the clement weather. It's actually not the cold which devastates these plants, it's the wind. During late May it was very breezy and my newly planted Trionfo Violetto and Meraviglia di Venezia (which I'm growing together over an arch) suffered a lot of damage to their leaves, and in their weakened state fell prey to slugs. I wasn't sure whether they'd make it or not but in the last week they've made a miraculous recovery, have grown beyond sluggy reach and look very green and lush. Trionfo Violetto is already in flower (right). Then there's the two varieties I got from the Heritage Seed Library. Kew Blue is now recovered from the shock of finding itself planted out in the real world and is starting to shoot upwards. I'm growing it in a small clearing in a potato patch, and as the potatoes continually encroach it does get a little shady and claustrophobic. But it's also very sheltered, and that has kept the leaves lush and pristine green ... in contrast to Mrs Fortune's, which I planted in a sunny open site and whose leaves have been rattled and flapped and baked to parchment (although it's still thriving well enough). I was also afraid the Kew Blue might be eaten by snails down in the moist verdant undergrowth but they've been largely untouched and most of the snails I've been finding there are just broken shells. I assume that means the moist verdant undergrowth is populated by hungry frogs and slow worms. 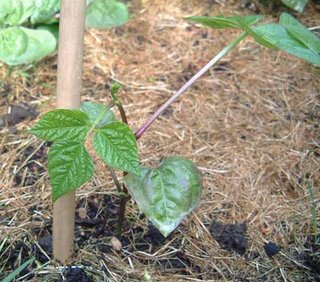 Climbing French bean Kew Blue sitting in a mulch of horse manure and grass cuttings. See how the colour of the leaf stalk graduates from purple to green.

I've been experimenting with very basic CSS coding on my blog template and have discovered how to highlight the plant variety names in my posts in a separate colour (without having to go through and code them all individually ... how cool is that?) So now people who google in here looking for information on specific varieties should find it easier to spot the ones they want. Let me know if it looks weird in your browser or the colour annoys you.
Posted by Rebsie Fairholm at 11:15 pm

Stay away from the big companies such as Burpee and Northrup-King and you should not have to worry about GM strains. Some small companies such as Seed Savers Exchange and Seed of Change only offer heirloom varieties. Territorial Seeds and Johnny's Seeds do well for me in the Pacific Northwest where the climate is similar to yours. I'm not sure what the advantage is to ordering from the US, though. I get much better deals ordering from Thompson and Morgan!

Thanks Molly, I really appreciate your advice. And you're right, Thompson and Morgan do some excellent deals and there's no special advantage in buying from the US. But in this instance the three varieties I wanted (Isis Candy, Copia and Black Cherry) were unavailable in the UK.

I have been growing Major Cook too. It was very late producing flowers but In the end I also found it expensive sending it back to HSL. It cost £8. Fascinated by your red podded peas, tried it but failed but am trying again. You grow so many you much have a huge garden