Today in the garden ... and elsewhere

Well, this is a first. I went out to a garden centre ... my favourite one, in fact ... and came away empty handed. I can't think of a single occasion in my whole life when I've done that. But there was absolutely nothing I wanted.

And on the way home I stopped off at a racing stables on Cleeve Hill where they have bags of well-rotted horse manure on offer at the roadside for a quid each. That's something I do need. But even when I'm shopping for shit I have standards, and having worked with horses during my childhood I know decent dung when I see it. Frankly their crap was crap. It was a mixture of newspaper and manure, but mostly newspaper, compacted, claggy and hardly rotted at all. You couldn't put it straight on the garden in that state. Not only that, the bags were two-thirds empty and you barely got more than a shovelful for your quid. A complete rip off. There was even a sign up asking people to bring the bags back afterwards. Bloody cheek. 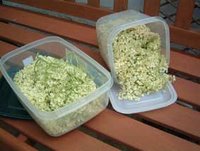 I've also been out collecting elderflower to make another batch of cordial. Doing a bucketload this time. This involved pillaging the hedgerow up on Prestbury Hill which, like most of Gloucestershire, has an abundance of elder. I came across some interesting wildflowers along the way, including some beautiful sainfoin (never seen that on the hill before) and an uncommon subspecies of poppy with smaller orangey-red flowers. 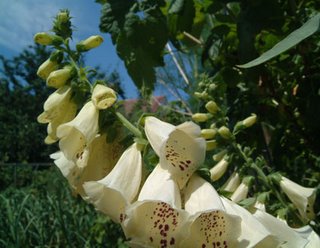 I grew this foxglove Primrose Carousel from seed

Back in the garden, the fruit is going into full-scale glut mode. Blackcurrants, tayberries, raspberries and strawberries are all ripe and begging to be picked (and the birds are certainly obliging). Gooseberries and whitecurrants are not far behind.

Meanwhile I've been starting off more tomatoes. Yes, I know it's technically a bit late for sowing them now. But in my experience, tomatoes just sulk in their pots up until the summer solstice and then go completely nuts. It doesn't matter whether you sowed them in February and nursed them on a windowsill or whether you left it till June and stuck them in at the last minute. They all seem to perform about the same in the end. As I have an obsessive-compulsive unusual-vegetable-seeking disorder I was unable to stop myself from buying some exotically striped Green Tiger tomatoes on a recent visit to Marks & Sparks and planting a couple of its seeds. The fruits are very striking indeed with their skins streaked in dark red and green and their flesh a very luscious crimson. The flavour is not absolutely to my taste but it's pleasant enough. So I'll see how that does. I'm also having to resow one of my American tomatoes, Isis Candy, since something has managed to snap the stem on the one seedling I had. The whole of the veg garden has put on a surge in the last few days, helped along by some nice sploshy rain. Climbing French beans are going like the clappers ... this is Kew Blue in the picture.
Posted by Rebsie Fairholm at 1:19 am