Get your filthy osculum off my lettuce

Where have all the frogs gone? Normally they come and hop about all over the patio whenever it rains, but I haven't seen a single one this year. A month or two ago I could hear them all croaking away in next door's pond every night. Now there's no sign of them.

Not only is that bad news for frogs, it's resulted in a mega slug epidemic. For the last two years I've barely had a single slug in my veg patch ... thanks to Frogville, a pile of damp stones and logs next to the veg. As soon as the slugs appeared the frogs would nip out and scoff the lot. But this year they're out of control. I put ten fine sturdy sweetcorn plants outside to harden off and the next day there were four and a half left. Nine out of twelve lettuces vanished without trace in a couple of hours, with only a tell-tale smear of silvery slime. They are vile and destructive little sods.

Also causing trouble at the moment are the dreaded sawfly caterpillars on the gooseberry bushes. Horrible little green wrigglers which are well camouflaged and hang out on the undersides of leaves where you can't see them. Left to their own devices they will skeletonise a plant in just a few days. And as I don't use sprays I haven't much choice but to pick the little blighters off by hand. Ugh.

Same goes for lily beetles, which are already turning my lilies into lace doilies. Luckily they're a shiny chestnut red colour which makes them quite easy to spot. And on warm days they go up to the top of the plants to shag in the sunshine, filthy little exhibitionists that they are. So at least you can pick them off two at a time.

Not all the wildlife is pissing me off though, there's nice stuff too. Blackbirds are nesting in the rose bush on the patio, and goldfinches at the bottom of the garden. I have a sociable robin who sits and watches me working in the garden and we often sing to each other. It freaks him out a bit actually, but he still keeps coming back.

The other day a red mason bee came along and landed on my arm, and stayed there for about ten minutes.

And then there's the slow worms. I'd never seen one before I moved here, but they are regulars in this garden (probably because it's such a mess and they've got plenty of things to hide under). They look like snakes, but have cuter faces. They're actually not snakes at all and are from a different family of legless reptiles.

Heh. Legless reptiles. I've been courted by a few of those in my time. 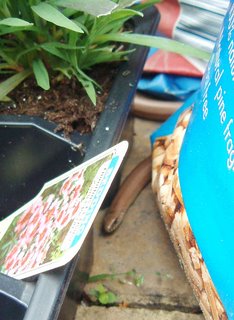 Found this chap on the patio the other day. Yeah it's not a great shot, but it was the only one I could get of his face.
Posted by Rebsie Fairholm at 12:32 pm

It's a she actually.

Really? How can you tell?

I love this post. Thanks for making me smile :D