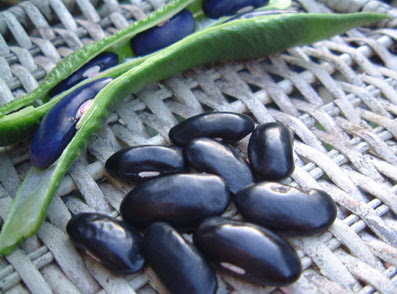 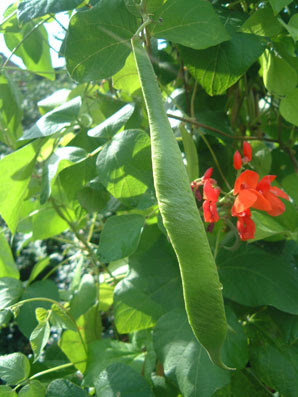 It may not be fair to judge its lacklustre performance this season because I know several other bloggers (and my neighbour) had problems with their runner beans in 2006, so the poor yields may not be anything to do with the variety. I might be inclined to give it another go just to see, but probably not just yet ... I think there are other better varieties out there.
Posted by Rebsie Fairholm at 5:42 pm

That dreaded word : string! Nothing worse than a stringy (runner) bean pod. I've several bagsin the freezer and I know some are stringy as I was greedy harvesting at the end of the season. Now it's like veg roulette whenever I cook a bag - please no string tonight!

Hahahaha ... sorry, I'm only laughing at how you describe it, I have every sympathy.

We grew what looks like the bean you have here- lots of pretty orange flowers and long , flat green pods that are sort of fuzzy. Of course I forgot to save or write down what variety they actually were!Anyway, it is getting chilly here and the beans & vines are so heavy they have actually pulled over the bamboo stake 'tepee' that held them up all summer, so we'e picked them off and are going to compost the vines.

I thought the pods seemed sort of stringy too, but our beans are not that big, and pink. Did yours turn dark IN the pod or after you picked them?? We ate some in the pods in August, but they were smaller and sweter then. I think we will just shell these and I'll cook them up like butter beans. :) Gardening is a fun adventure!!