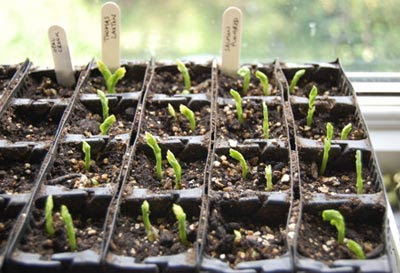 I don't often endorse commercial products, and even less often patented ones. It's even more unusual for me to spend sixty quid on plastic flowerpots (I'm still checking my pulse). But as a former cardboard-tubeholic sceptical of overpriced plastic I've been won over by the usefulness of the Rootrainers system. Although I was in denial about it for a couple of years (clinging to my bog rolls) there's no question that the crops I raise in Rootrainers do significantly and consistently better than the ones grown in anything else. Consequently I've decided to blow my Christmas money on a few extra trays of them for this year's pea extravaganza. I still save bog roll tubes through some obsessive compulsive disorder but I'm going to have to find some other use for them (overwinter nests for giant bees?)

There was a discussion on this blog a while back about whether the chemicals used in bog roll tube manufacture leach out into the soil and harm the plants. Since then I've been looking carefully at how well my bog roll grown peas have been getting on and although they usually do all right once they're planted out there certainly seems to be an issue with germination. I normally get close to 100% germination from my home-saved peas but when sown in a lavatorial cylinder, germination flushed down to 50-70% with very erratic emergence. Some didn't show themselves until about three weeks after sowing. Particularly badly affected was the breeding project from which the red-podded pea later emerged. More than half the F2 seed I sowed was lost to poor germination, and some of those might have been useful red phenotypes ... I can't afford to lose that many. Later in the year I sowed some more seeds from the same batch in Rootrainers, and got full germination in just a few days. 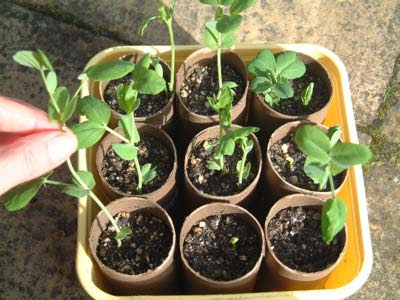 I know there are a few arguments against using Rootrainers. They are expensive. Patented products carry a premium and I'm often wary about what I'm actually paying for. But while I'm deeply opposed to the patenting of genes and plant varieties, when it comes to protecting genuinely useful (non-living) inventions that took a lot of work to design it's a bit different. If you look closely at the design of a Rootrainer 'book', how snugly it fits together and how the shape of every nook and cranny has been meticulously engineered to nurture the plant's roots and aerate them without letting the compost fall out, it's obvious that someone who knew what they were doing has put a lot of thought into it. They are a bit fiddly to clean and put together and (the big ones at least) seem to consume frightening amounts of compost, but what can I say? The plants they produce are among the best I've ever grown.

Rootrainers were developed in Canada for the tree propagation industry. Forestry is not so big in the UK but they are beloved here by sweet pea growers for the deep root runs they provide. I've never seen them specifically recommended for culinary peas, but as Pisum and Lathyrus grow in a similar way and have similar needs I thought it was worth a go. And it was.

I should point out that not everybody would benefit from growing peas this way. If you're growing seeds from a big packet you got at the garden centre you might as well save yourself the bother and direct-sow them in the ground, accepting that some will be eaten by birds or mice and can easily be replaced if necessary. Or use lengths of guttering, which also works well. But I grow a lot of stuff which isn't replaceable ... rare heirlooms and my own breeding projects. Very often I only have 10 or 20 seeds or less of any given type and can't risk direct sowing. For this kind of thing Rootrainers are invaluable.

Rootrainers are hinged plastic 'books' which fold in half to make very deep modules (up to five inches), and sit in a plastic frame all wedged together. It's the wedging-in that holds everything rigid, so if you take a couple out the rest will either fall over or spring open unless you wedge some other small object in there. But all the same it's useful to be able to slide out individual rows, which you can't do with a conventional module tray. And there's no sagging when you pick them up either. The sides of the books are grooved, which neatly trains the roots of seedlings down in a straight line. Each cell has an opening at the bottom which allows the roots (but miraculously not the compost) to emerge through the bottom and be 'air-pruned', which encourages the seedling to make more roots, which also grow downwards in perfect straight lines. At planting-out time the books can be lifted out of the frame and opened, and the rootball (or rootwedge, more like) will slide out with very little root disturbance. And more importantly, with very little top disturbance either. Peas have incredibly fragile stems which are easily broken when planting out (to compensate for this vulnerability they are exceedingly good at surviving injury, but it's much better to avoid damaging them) so it's good to use modules which you don't have to tip upside down or tap or squidge the bottoms of. 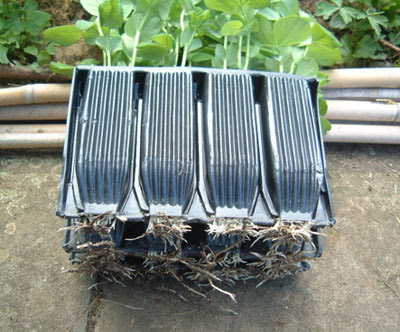 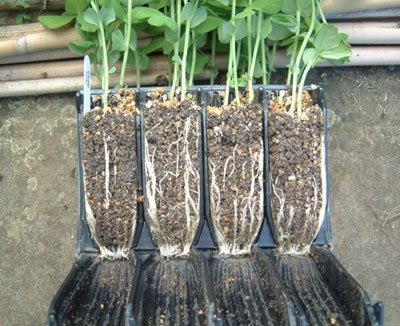 The aeration underneath makes a huge difference to the health of the plants and the drainage is really well balanced, so any watering from the top drains straight through and watering from the bottom (which I find works better) soaks up quickly. They retain moisture far longer than normal modules but because of the good aeration I hardly ever have any problems with mould or with seeds rotting in the soil - a very common problem with peas sown in bog roll tubes.

One thing about Rootrainers (and bog roll tubes for that matter) which I find useful is that there's no need for potting-on. The root run is so deep it keeps the plants surging away until they're big enough to plant out. With peas it is important to plant them out before they get too big, especially tall varieties. If you leave them too long their tendrils grab hold of their neighbours and it's a right sod to separate them. They also flop over and bend the stems so a bit of care is needed to get the best out of module-sown peas. All the same, the reliability of growing them this way is well worth it. When using full-sized Rootrainers (5" deep, 32 cells) I sow two peas in each module, so I get 64 plants per tray. I don't thin them, because peas are sociable plants and like climbing up one another. I plant the pairs out into the garden when they're a few inches tall and they grow away like rockets.

Since I'm stocking up on new Rootrainers this year I'm going to try the smaller-celled version, which is very slightly shallower, uses a lot less compost and has 50 small modules per tray instead of 32 big 'uns. I think these will be ideal for sowing peas individually, which is what I want to do with some of my breeding projects.

Last year I tried sowing sweetcorn and climbing beans in Rootrainers, and they all did extremely well too.

As I say, the advantages of Rootrainers are likely to be useful to some people and not others, depending on what you grow and how you like to do it. But so far for me they've proved themselves a good investment, and they do last for years. I've used them with coconut coir (very light and airy, good in every respect but the plugs tend to fall to bits when planting out), peat-free multipurpose compost, and a John Innes seed compost (makes a nice sturdy plug but it's very heavy and some of the sandy particles get washed out the bottom).

On the subject of giant bees, I was out in the garden on New Year's Day and I met with a huge bumble bee the size of a guinea pig. Well all right, it wasn't quite that big but it was pretty damned enormous. It was buzzing around listlessly in the frost looking confused. I don't know what's going on with bees at the moment.
Posted by Rebsie Fairholm at 9:27 pm 30 comments: